When buying a coastal boat, the question arises again and again: How does it work? How can I properly surf with a Coastal Boat? Do I need a planing hull or a displacement hull?

The answer is simple – most available boats are both. As shown here in the sketch (Credit: blisterreview.com), boats are displacers in the bow and gliders in the stern. Similar to powerboats – highly motorised motorboats – Coastal Boats have displacement and sliding properties. The bow “displaces” – the stern slides. During regular rowing – in flat water and light wind – we usually displace. Our bow cuts the water, displaces it and we push our way through. Unfortunately, without waves, we usually don’t get to the planing speed. Not normal rowers, anyway.

But let’s start at the beginning:

It’s the length that makes it “run”

When you are out on the lake or river,  you always struggle with waves that are caused by other boats, ferries, or cargo ships. If you observe the waves more closely, you can see that they are not only caused by large passenger ships or barges, but also by our small rowing boats. These boats displace and form a bow wave. These bow waves are caused by the speed of the hull (German).

There is an easy example – compare an 8x+ with a 1x: As the speed increases, the generated wavelength increases, and at the same time the stern wave moves closer to the bow wave. If our bow wave were to merge with the stern wave of the boat, our boat would theoretically straighten up. There are also calculations that shorter boats build up relatively greater resistance. “It’s the length that makes it “run” – see the DRV report (German).

Surfing with Coastal Boats: How do I get to planing?

Surfing with coastal boats. One way to overcome the limited hull speed on the coast is to row down the incline of the wave when the swell is decent. With its force, the wave pushes us from displacement to planing.

What is a planing boat?

Due to the construction of their hull, planing boats are suitable for rising out of the water. They do so by using strong waves against the resistance of the water and basically glide on top of the water. So, the majority of the boat is above the waterline. As the hull rises out of the water, the drag of the bow wave is reduced. Now the sliding surface in the stern of the coastal boat comes into play: The stern begins to slide on the wave as the speed increases further. The bow wave and stern wave merge into one wave, the boat moves in front of this wave and lies almost flat on the water. Due to the much lower water resistance, significantly higher speeds are achieved compared to a usual displacement boat. That’s the theory at least. Read our post about the boat as a breakwater (German).

When your boat is pushed by the wave, it is called planing. And this moment is crucial in the race. When your coastal boat is planing depends very much on the flat stern/hull. But also the weight distribution can be a factor: basically, it also depends on how you sit and where your stretcher is. Take a look at your hull before rowing. A long, flat hull with a wide stern is theoretically advantageous for planing. There are currently some Co2x available, which are great workmanship but have a rear-heavy centre of gravity. Anything but glider-friendly.

And caution is advised. You should practice this gliding a few times. It is not so easy to reposition your posture and let your skulls loose in the swell. You don’t want to dive into the trough of the waves.

Surfing and the weight of the boat

All coastal boats are designed as planers and displacers – no matter how many people sit in the boat. A Co4x glides later than a Single. And that brings us to the construction aspects and weight. What other criteria are there for surfing with coastal boats?

Construction Aspects: The shape of the boat hull

For a coastal boat to be able to glide at all, the last third towards the stern must be shaped in such a way that it can hit its bow wave (and overtake it) with as little energy as possible. This can only be done with the power of waves. The bottom of the hull must therefore offer as little surface as possible and displace as little water as possible.

The hydrostatic lift of the displacement phase is, therefore, more and more supported by hydrodynamic lift as the speed increases. This will lift the boat out of the water. The resistance of the bow is reduced and the speed increases. Finally, the heavy stern of the coastal boat also begins to slide on the wave. Now the resistance of the water is so low that, despite our weight, high speeds can be achieved. The hydrostatic forces on the boat are now comparatively low, the hydrodynamic buoyancy predominates – “Length makes it run”. A report (in German).

Many boat builders offer coastal boats in different versions. The standard has the minimum weight required by FISA. However, many go further and build lighter boats because one aspect of getting into planing faster is a lower weight of the boat. It is not without reason that World Rowing has so far ensured that all regatta boats have the same minimum weight. If you don’t participate at regattas it is a different matter. If you have a boat made of carbon, you save 4 – 10 kg compared to the standard version. This can be even more for a Co4x. Less weight means earlier planing and more speed. But let’s not go too far ahead of ourselves here: we’re talking about a maximum of 2-5 km/h. 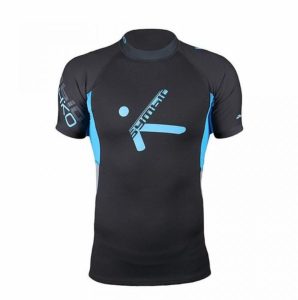 Our Neoprene supplier, HIKO, cares about our environmental footprint. Hiko e.prene / Neoprene and Coastal Rowing are becoming a symbiosis: Good for rowers and good 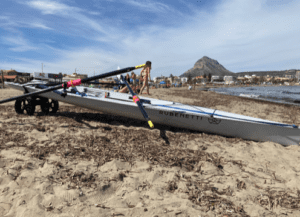 From the car seat into the Coastal Boat in just 5 minutes?

Imagine you’re going to the coast for a weekend of rowing. How long does it take you to get from parking the car to your