The 2nd Coastal Rowing Regatta in Bremerhaven was a great success. Exciting races took place in the beach sprint and long distance. The organizer was very satisfied with the regatta. Only the weather was a bit tricky at the weekend and left participants and organizers really wet on Sunday. The DRV released the following statement (translated from the German press release):

In difficult weather, the 2nd Coastal Rowing Regatta took place in Bremerhaven on August 21st and 22nd. Around 125 rowers from all over Germany and Switzerland had registered for the event.

Unfortunately, the usually reliable wind on the North Sea took a break on Saturday and only blew moderately on Sunday – an advantage for most of the participants with little experience in coastal rowing. The vastness of the regatta area, big ships and the current of the Weser challenged everyone equally.

Qualification of the Coastal World Cup

Under the eyes of Katharina von Kodolitsch, the DRV department chairwomen for association development and association service, the qualifiers for the beach sprint of the Coastal World Championships in Oeiras (Portugal) started on Saturday. Maiko Remmers (ARGO Aurich) won the Men’s Co1x, Carina Hein (RC Allemannia Hamburg) the Women’s Co1x and Carina and Malte Hein won the Mixed Co2x.

The fact that the course was set up analogously to Oeiras turned out to be a problem for the junior team of the Allemannia Hamburg club. Although the last children’s slalom on the Dove Elbe was not that long ago and both of them competed quite successfully, they got lost, so that all victories in the junior categories went to the Ulm RC Danube, coached by Sina Burmeister.

Thrilling races took also place in the standard beach sprint competitions, now on 4 lanes and without slaloms. Apart from a time penalty for warming up in the fairway of the federal waterway, no sanctions from the competition judges Holger Heitsch (Otterndorf) and Martin Mensch (Bremen) were necessary, and all boats remained intact.

You can find all results here. 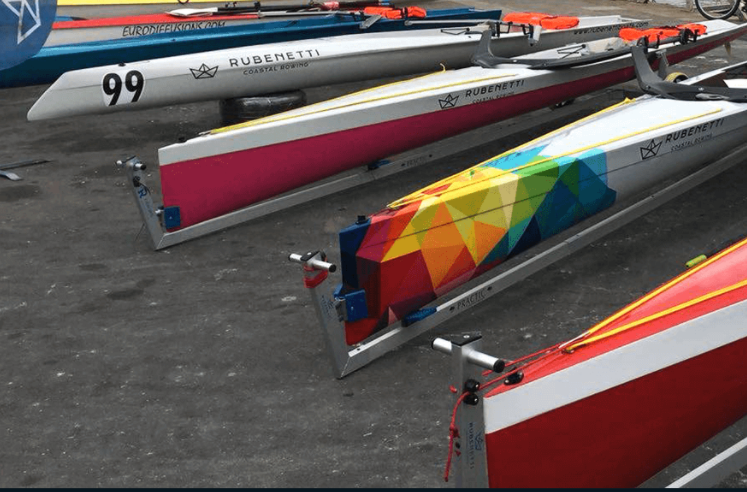 The Bremerhaven rowing club would like to thank the sponsors Fast Sports and Rowing in Europe for the provision of numerous boats and active support in preparation and implementation of the regatta.

What’s up next? The Coastal Regatta on September 11-12 in Flensburg.